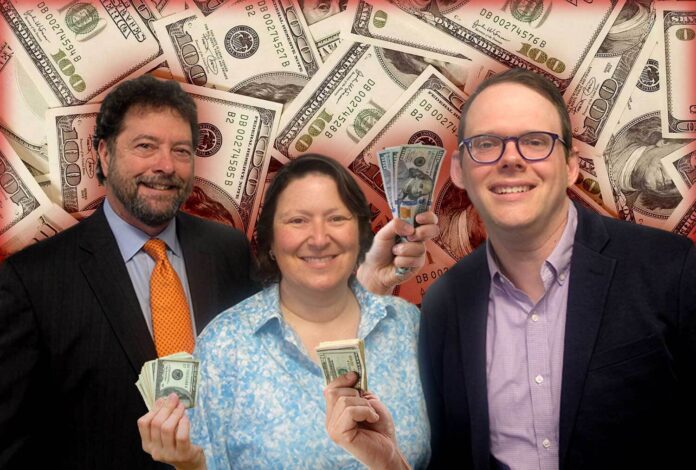 Session Musicians’ Money Stolen by the Union Meant to Protect Them

If you’ve ever played on a recording as a hired gun, you are entitled to more than just the check you got for the session.

You are guaranteed (up to) 5% of all the performance royalties that recording ever makes. If you haven’t been getting these checks, this is part of the problem I’m going to get to. But even if you have been receiving this money, a good chunk of it has been withheld from you and pocketed. By whom? How did they get away with this thievery? Read on.

In 1995, Congress first passed a law giving “non-featured performers” – or what’s more commonly referred to as session musicians, backup musicians, sidemen, hired guns, players, what have you – 5% of performance royalties from the recordings they played on.

Well, you may not know that this law became part of Section 114 of the US Copyright Act, but you know that you get SoundExchange checks occasionally. SoundExchange was set up by the US government to collect and distribute these performance royalties for musicians and labels.

Every time a song gets played on digital or satellite radio (like Sirius/XM, Pandora, iHeartRadio), a performance royalty is earned.

These digital radio services are legally required to pay this money out. They pay SoundExchange. SoundExchange then pays 95% of this money to the labels and Featured Artists. And 5% to a non-profit called The AFM & SAG-AFTRA Intellectual Property Rights Distribution Fund (or “the Fund” for short) for the backup session musicians.

The Fund is currently run by (six trustees appointed by) SAG-AFTRA and AFM.

The Fund has paid out over $430 million in total and $60 million just last year.

For clarity, whether you are an AFM or SAG-AFTRA member makes no difference. If you played on a record as a backup musician or vocalist, you are legally entitled to this money. If you’ve never received a check, you can first check to see if they are holding your money here or you can email this form to [email protected].

For clarity, The Fund only calculates and (attempts to pay out) royalties for the top 14,000 – 16,000 recordings every year.

The Fund CEO, Stefanie Taub, states that there are currently 27,024 musicians who have not claimed their money yet.

See for yourself here. In a sworn statement Taub’s attorney’s filed in federal court last month,

Taub admits that they have over $50 million in unpaid money because they can’t find who to pay.

“THE FUND ENGAGES IN EXTENSIVE OUTREACH EFFORTS TO PROMOTE AWARENESS AMONG NON-FEATURED PERFORMERS OF THE EXISTENCE OF THE UNCLAIMED ROYALTIES LIST”
– STEFANIE TAUB, THE FUND CEO

(In fact, the Fund recently settled a class action lawsuit in New York for $45 million over its persistent failure to actually find the performers entitled to these royalties. You can find more details about that settlement here.)

But we haven’t even gotten to the f’d up part yet!

In 2013, the AFM and SAG-AFTRA saw how much money The Fund was generating from the boom in digital streaming and thought to themselves “we gotta get a little taste of this!”

So they dipped their hands into the cookie jar and started stealing a portion of this money.

Now, the AFM (the “musicians union”) has been shedding members rapidly.

And after it became public that the AFM was the organization that blocked an exemption for the music industry under California’s “gig worker” law AB5 (nearly crashing the California music economy), many of their members, rightfully so, were so fed up with them that they turned in their membership cards.

+California’s Music Economy is About To Crash

If you’re unfamiliar with the AFM and you didn’t actually realize there was a musician’s union, you’re not alone. The AFM has pretty much fallen into oblivion, but unfortunately they’re still hanging on, fighting for the few members that they have left. Who are they fighting against? Not quite sure. The very few union jobs for musicians are if you play in a huge symphony orchestra (like the LA Phil), record on a film score, or play on a major label record. And the AFM apparently has contracts with some big venues like the Hollywood Bowl. Most of the members I’ve spoken with haven’t done a “union job” in years, and have just kept their membership because, well, they don’t know how to get out!

So, the AFM is hurting, desperately, for cash.

Since 2013, the AFM (and SAG-AFTRA) has been skimming 3% of all the money that passes through The Fund.

The AFM is essentially stealing millions of dollars from the musicians they are claiming to protect – to keep themselves afloat.

How can they do this? Well, the law governing the Fund (section 114 of the Copyright Act) states that the Fund is allowed to use the royalties it collects to pay for its “reasonable costs” of operation like staff, offices and other admin work.

From 1998 – 2013, they had been deducting their costs based on, well, the actual costs of running the Fund. But starting in mid 2013, they tacked on this additional 3%, totaling more than $9 million taken from artists to date.

What for? They claim it’s for access to a special database maintained by the unions. But in reality, the database is just the AFM and SAG-AFTRA union membership lists – which they already have (and had been providing for free for years). So, they are essentially charging the Fund well over a million dollars a year now for login credentials. By god, I want that job!

From whom to who? From the AFM, to, The Fund – run by the AFM. Hmmm, smells a little funny wouldn’t you say?

The left hand made an agreement with the right hand.

Not to mention that it’s the same people running the AFM and on the Board of Trustees of The Fund. And it’s the AFM’s long-time attorney, Patricia Polach, who was hand-picked to “advise” the Fund in agreeing to fork over this money.

“Hey Patricia, we’d like to license this spreadsheet for, er, $3 million, sound fair?”
“Sure Patricia, sounds fair to me, you, I mean, me, you, wait who am I negotiating with again?”

Is this ethical? I don’t know. I’m not an attorney, but I could probably play a better one on TV.

This slimy, sneaky little 3% licensing deal for a spreadsheet has gone unnoticed and buried in The Fund’s Annual Report for YEARS! In the report it’s called the “Data Purchase and Service Agreement.” It’s under the “Related Party Transactions” and you can find it in every (public) report dating back to 2013 here. What they don’t tell you is that the services they’re now charging these insane figures for used to be free, because they cost the unions practically nothing to provide.

Where did this 3% number come from? Apparently, it’s totally arbitrary and largely a product of SAG-AFTRA trying to rein the AFM in. Back when this little money-grab was getting worked out, the AFM wanted 6-7%. SAG-AFTRA on the other hand was fine with 0%. Why? Well, because the AFM has been hurting for cash. And SAG’s books are just fine. (Full disclosure: I’m a SAG-AFTRA member and receive checks from them regularly – thank you very much!)

But get this, according to an inside source with knowledge of the discussions over this deal, multiple high-ranking officials at The Fund have repeatedly questioned the basis for this 3% fee over the years – admitting that the percent-based structure made no sense from a business perspective and frankly cost the Fund far more than what it was getting in return was worth.

And, it was an open secret at the Fund that the main driver of the service fee was Ray Hair, President of the AFM.

It took the Grammy winning producer and songwriter, Kevin Risto, to blow the whistle on this.

Risto, who has worked on projects with Justin Bieber, Frank Ocean, Jennifer Lopez and Fantasia, is the plaintiff in the pending lawsuit against the AFM, SAG-AFTRA, and the Fund’s trustees fighting to stop this baseless cash grab.

“In this case particularly, many like myself are not even members of these unions and organizations that are supposed to be acting with accountability as a mandate of the funds that have been set up to distribute these hard earned royalties. All we are asking for is fiduciary responsibility and transparency in the operations of these funds to the benefit of all royalty recipients in this class, both union and non-union.” – Kevin Risto, plaintiff

On September 14th, 2020, after more than two years of the AFM and SAG-AFTRA trying to get rid of the case, Judge Christina Snyder ruled to officially certify it as a class action lawsuit.

The lawsuit (which was originally filed in June of 2018) is Kevin Risto “on behalf of himself and all others similarly situated” vs. SAG-AFTRA, AFM, Ray Hair (current president of AFM), Duncan Crabtree-Ireland (COO of SAG-AFTRA), Stefanie Taub (CEO of the Fund) along with the other members on the Board of Trustees of the Fund who implemented the 3% fee.

Although the case is now certified as a class action lawsuit, it’s still far from over. The AFM and SAG-AFTRA still plan to argue to the judge that they can basically charge the Fund whatever they think their data is worth – and if that amounts to millions year after year for updating a spreadsheet – who is going to question it? The Trustees they appoint at the Fund they run????

If you are a musician who has ever played on a recording that got digital radio spins, then you’re entitled to this money.

What do you need to do right now?

First, share this article to help blow the whistle on these scumbags. If I learned anything from the AB5 fight it’s that the only thing the unions listen to is public pressure – especially from their members (and the press).

Next, if you’re an AFM member, write the president, Ray Hair and ask him “Why have you been skimming off 3% of our money to put in your pocket?”

“No really, this is not rhetorical, I’d love an answer. Thanks, – current AFM member.” You can reach him at [email protected]

And lastly, cancel your membership with the AFM. This, unfortunately, is an organization that has proven time and time again incapable of looking out for the needs of their members and, more importantly, the music community at large.

Shame on you co-chairs of The Fund Ray Hair and Duncan Crabtree-Ireland. Shame on you Stefanie Taub. Instead of stealing money from the people you are supposed to protect, why not actually, I don’t know, protect them from companies like, well, you.

You can read the Order Granting Motion for Class Certification here.

Representatives at the Fund, SAG-AFTRA or AFM did not immediately respond for comment. I will update this with their statement if and when they respond.

You can read the original article here.

Podcast Alert! Back at it in 2022! Everything you need to know about registration deadlines... Listen now! https://shows.acast.com/money-in-the-air/episodes/registration-deadlines

Another busy year for IAFAR! Thanks to the support of our members we’ve educated substantially more performers and rights holders about Neighbouring Rights.
Our January newsletter will recap IAFAR’s activities for 2021.
Enjoy the holiday season.